Back in the late ‘60s to the ‘70s, one of the trendiest fashion styles was wearing bell-bottoms. It is a style of trousers that become wider from the knees downward, which forms a bell-like shape of the trouser leg. It is also known as flares. This type of pants was shown in the iconic ‘70s television show titled “The Brady Bunch.” It was about the story of a man named Brady, who has a blended family of bell-bottom-wearing sons and daughters.

However, even before the 1960s and the airing of that sitcom, did you know that bell-bottoms already had a 150-year start in becoming part of the fashion legacy? This means that it was not the cool kids of the late 1960s and 1970s who were the first to wear bell-bottoms. They are originally worn by the American sailors during the War of 1812, hence, the original hipsters. If you’d like to learn more about it, read on as we’re giving you more information about bell-bottoms. Also, you could get in touch with the associated website Cult Bravery for more useful information.

The History of Bell-Bottoms

There was no account that exists of who invented bell-bottom pants. But they were first recorded in history being worn by sailors in 1812 during the war. The flared bottoms of the pants offered the sailors more function than fashion, as they can easily roll up their trousers in case of high water due to their wide legs. Also, a water-soaked sailor who finds himself no longer aboard could easily remove 20 to 30 pounds of saturated wool without having to remove his shoes, as he would need to protect his feet to avoid becoming shark bait. With this, bell-bottoms have been part of the U.S. Navy uniform until 1998.

It was in the 1920s when bell-bottoms entered the fashion world, and it was through the state-of-the-art styles of fashion designer Coco Chanel. The fashion industry was revolutionized by Chanel by taking women out of tightening corsets and dresses and making them wear trousers. Chanel, never shy about expressing the need for comfort when it comes to women’s clothes, was drawn to the loose-fit sailor pants. Later on, these pants served as inspiration for her wide-legged trousers known as beach pajamas and yachting pants, which were predecessors for the modern-day bell-bottoms.

Bell-bottoms were happily embraced by European women when they re-emerged in fashion in the mid-1960s. The American hippie subculture also adopted them immediately as their chosen attire. However, it was not until Sonny and Cher wore them regularly on their television show from 1971 to 1974 that bell-bottoms finally arrived. When the late 1970s came, bell-bottoms were part of everyone’s wardrobe. Bell-bottoms became available in denim, bright cotton, satin polyester, and corduroy. The look will also not be complete without a pair of platform shoes.

In the early 1980s, bell-bottoms gave way to parachute pants, stirrup pants, and leggings as the disco era were replaced by hip-hop, pop, and heavy metal music, whose artists favored tight and skinny than flared pants. After a decade, in the 1990s, bell-bottoms were reinvented as boot-cut pants. They are similar to the flared style of bell-bottoms but have a smaller flare and a tighter fit from the knees up. Pants with large flare legs that have a more relaxed fit than boot cuts also succeeded the original bell-bottoms. In the late 2000s, skinny jeans became the trend, but boot cuts and flare legs still remain as fashion staples.

How to Fashionably Wear Bell-Bottoms Today 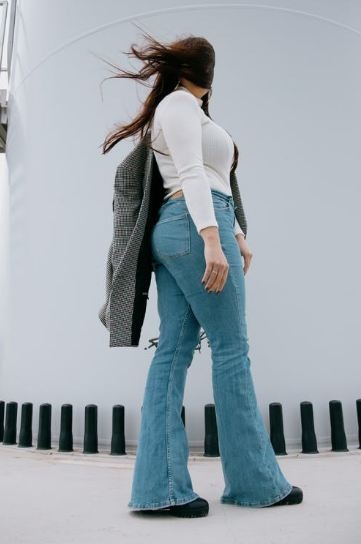 Bell-bottoms have triumphantly returned to fashion catwalks in the 2020s. They are very popular among women as they are versatile and suited to almost all girls. They can perfectly highlight the beauty of the hips and shapely legs. Wearing bell-bottoms is great. If you want to wear it fashionably today, the secret depends on what you wear with it.

The Best Outfits to Wear with Bell-Bottoms

If you wear a classic white shirt and short satin vest along with bell-bottoms, then it is perfect for the office. It will result in a strict and at the same time very stylish look. You can choose black bell-bottoms or neutral shades for a business-like manner.

Bell-bottoms also look great when worn with jacket ensembles to the waist. This style looks feminine and neat. It is perfect, especially for jackets that are decorated with slotted pockets and ruffles. These pants are also suitable for the same ensemble as usual jeans. Bell-bottoms are vital in a country style. You can pair them with a checkered shirt with rolled-up sleeves.

You can also wear blouses with a narrow neck and expanding bottom together with bell-bottoms. Wear high heels with this style, and you will look really amazing. You can also add your image by wearing a denim jacket and some massive bracelets. In addition to that, you can also pair bell-bottoms with loose-fitting linen shirts, then use a bag with fringes.

During the summer season, you can wear bell-bottoms with short tops, colorful blouses, and tight shirts.

Best Outfits to Pair with Bell-Bottoms for the Night Outfit

If you want to wear bell-bottoms for a night out, then it is better to choose long bell-bottoms that are made of stretch materials with glitter. Pair the pants with pretty high-heeled shoes to add a new image. For the top, the best choice is a halter top with a plunging neckline that is triangular in shape.

If you want some accessories to go with the style, you can wear a man’s hat, some big earrings, and a bright-colored red scarf. Aside from a halter top, you can also choose to wear a brilliant top of bright color with details on the chest and thin straps. You can also wear a long cardigan and a dense jersey with bell bottoms.

While bell-bottoms are quite easy to pair with other pieces of clothing, you should remember not to wear them with ballet flats or sports shoes. Also, sports jackets are inappropriate, and they do not look good with bell-bottoms.

Bell-bottoms are indeed among the classic style of pants that are still being worn by many people today. Who would’ve thought that a sailor’s uniform would become iconic and fashionable? We hope this helped you learn more about bell-bottoms. For other classic fashion information, you can check out our list of Interesting Facts About the Iconic 1960s Fashion Scene.

The post What are Bell-Bottoms? first appeared on thedailyvogue.com.

The Benefits of Vegan Clothing

Who Dresses the United States Presidents?

How to Wear Skirts When it’s Cold Outside

Tips for Styling Outfits with a Long Skirt 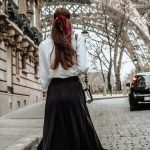 Tips for Styling Outfits with a Long Skirt
Next Article 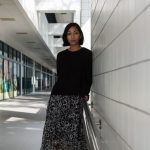 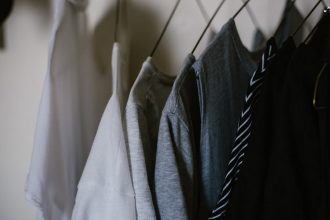 The Benefits of Vegan Clothing 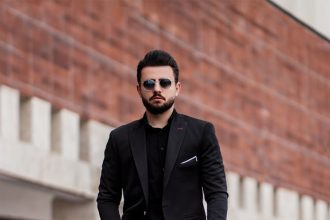 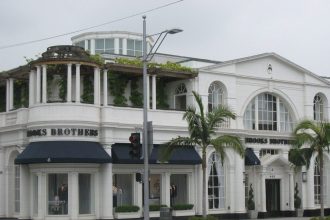 Who Dresses the United States Presidents? 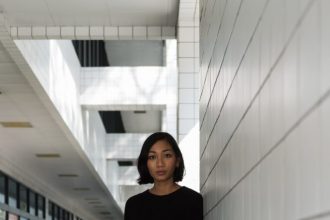 How to Wear Skirts When it’s Cold Outside